The Foyle Young Poets of the Year Award 2011 DEADLINE is fast approaching. The closing date for a chance to be discovered is 31st July 2011.

The Foyle Young Poets Awards is open to writers worldwide aged 11-17. Last year they had over 20,000 entries (a huge increase from 2009 where there were around 14,000 - which was itself an increase from previous years) and a number of international winners from such places as Athens, Mauritius and the US, who managed to attend the prize giving ceremony in October 2010 as part of National Poetry Day.

This year's judges, following previous ones including Lemn Sissay, Luke Kennard and Jane Draycott, are Glyn Maxwell and Imtiaz Dharker.

Last year's judges, Luke and Jane, commented on the winning poems that there was a distinctly musical, rhythmic element perpetuating their work, a theme strengthened by the fact that the survey carried out recently by the Poetry Society revealed an intrinsic relationship between the young poet's musical tastes and their poetic style. Bob Dylan was named by far and away as the most influential musician in terms of their poetry. And as one of this year's judges, Glyn Maxwell, says: "The best young poets remind me how to have no fear, how to make awe seem cool, how to know nothing again, like the best poets do. I simply know that we will find some born writers."


Individuals can enter online or download an individual postal entry form while Teachers can download a class set entry form. 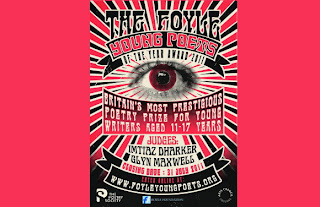